The sky cleared briefly before daybreak. The sharp, bitter winds eased somewhat, but the negative forty-degree temperatures penetrated to the bone. Hiram McDowell lifted the flap of a one-man tent to look in on Erick Woolf, who turned his head, his beard tinged in frost-white from his labored breathing. Woolf lifted his goggles, his pale blue eyes opaque with fatigue.

Woolf shook his head “no,” trying to smile, but his face remained motionless.

Hiram took off his outer gloves, freed up an oxygen tank from Woolf’s backpack, and placed the mask on Woolf’s face. Woolf rallied after a few minutes of oxygen.

Within half an hour, with four other climbers, Hiram and Woolf started for the summit. Woolf’s fatigue slowed progress, and after an hour they soon fell behind the others. The wind gusts increased. Woolf sank into a sitting position a few yards from a slope of snow and ice.

Hiram steadied himself on a steep vertical. For a few seconds, the visibility improved, but he saw no one.

With only slight hesitation, Hiram waved his agreement. He had only two hours or less to summit before their oxygen supply ran low. And Woolf was too weak to go on; the rest would strengthen him. At the summit, Hiram took photos and, for a few minutes, absorbed the satisfaction of his achievement and the awe of the view from the highest point on earth.

Winds picked up, and snow and haze decreased visibility as he began his descent. He pressed on. After an hour, he stumbled onto Woolf a few feet from where he had left him.

“Get up,” Hiram yelled over the howling wind.

“Help me. In the name of God,” Woolf pleaded.

Hiram gripped Woolf’s parka to help him stand, but Hiram was too weak to lift, and Woolf fell back.

“Rescue,” Woolf moaned, drifting off into semi-consciousness. Rescue from base camp was impossible until the weather improved. And they were in the dead zone, too high for helicopters.

Hiram freed Woolf’s remaining oxygen supply and attached it to his own pack.

Hiram backed away and started down. Climbing ropes aided him for a few hundred yards. Near a rock crevice familiar to him, he stumbled on the half-buried lifeless body of a facedown climber. A candy bar and water were in the inner jacket pocket. Near the corpse’s outstretched arm, a glint of silver stopped Hiram. From hard snow and the ice-solid fabric of a frozen glove-hand, he freed a silver crucifix that he pocketed for identification and to send to family. He plodded ahead. The storm abated, and he felt the muted exhilaration at knowing he would not die.

On return home after his miracle survival, Hiram dreamed of immortality. He determined to climb every peak above 8000 meters in Nepal.

END_OF_DOCUMENT_TOKEN_TO_BE_REPLACED 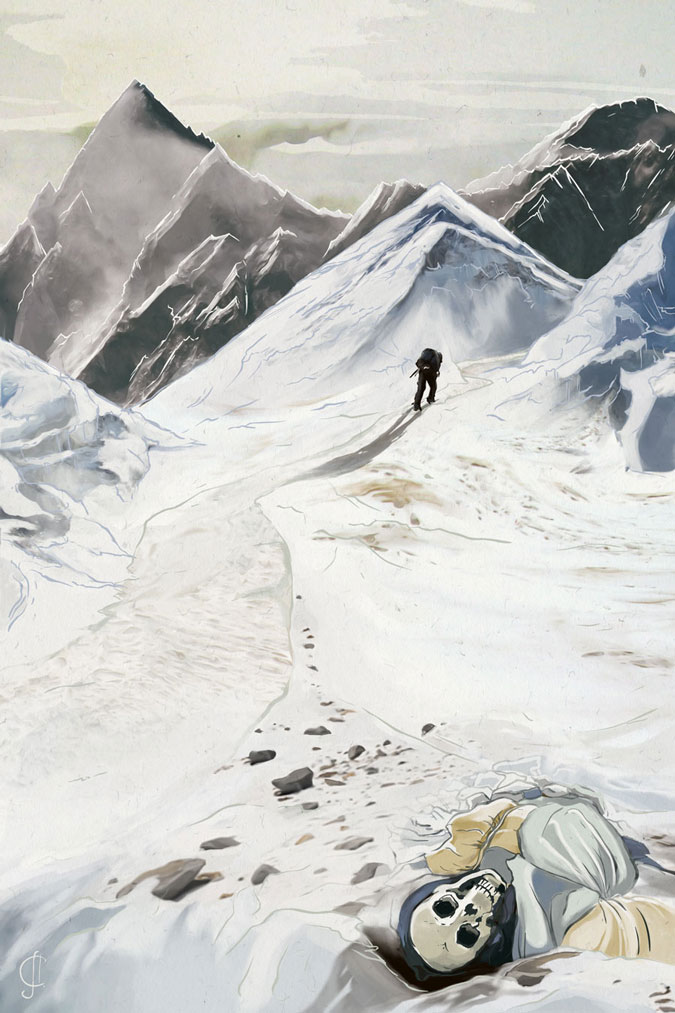 Available in print and as eBook from these retailers: